First of all, yes, it does exist! I have met people considering homeschooling who thought that only religious curriculum existed. Maybe people don’t know what to type into Google. Curriculum that avoids a religious slant is called “secular curriculum.”

Here is a short list of some of the secular options available:

Complicating the issue of finding a secular curriculum is the fact that people who write the most popular reviews of curriculum (I’m looking at you, Cathy Duffy) have a muddled definition of the word secular. Then, you get lovely memes like this one that has been floating around for a couple of months now: 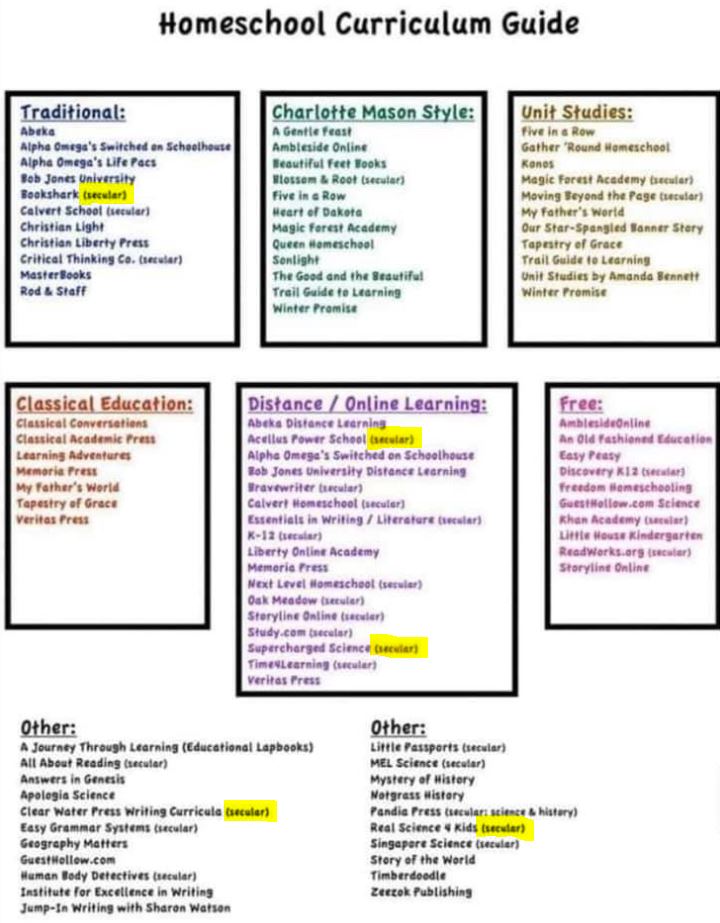 I don’t know the vast majority of the curricula listed without the secular disclaimer. (Note that the author assumed that the default was people looking for religious materials.) Those five suggestions that I highlighted were marked (secular) by whoever created this list. They are neutral at best. Every family has to decide for themselves what combination of secular and religious they are willing to tolerate. So, let’s talk about the difference. Truly secular curriculum includes the following, broken down into the 4 academic subjects:

Science – The curriculum uses modern scientific theories throughout. It included the geological age of the earth (millions of years) and evolution. This would be most obvious in chapters or books that cover earth science and life science or biology.

History – Secular ancient history begins with prehistory, such as hominids, hunter-gatherer tribes, and cave paintings. All time periods strive to include not just European/Middle Eastern civilizations, but also African, Asian, Australian, and American cultures in their own right, not just after Europeans colonized them. It also attempts to include the contributions of women throughout history instead of just dwelling on the accomplishments of old White European men.

English – Secular English curriculum uses literature from the vast spectrum of written works that have been produced. It may include books written by religious authors or containing religious characters and events, but never in a manner indicating that religious texts hold some existential truth.

Math – There shouldn’t even be a need to look for a secular math curriculum, but unfortunately religious publishers manage to ruin even math. The buzzword to look for that indicates religious leanings is “stewardship”. That would be what is otherwise known as “financial literacy”, but with tithing and strict gender roles added.

Neutral curriculum happens when religious publishers want to get their hands on tax money by selling to charter schools. Since charter schools are public schools, they cannot spend tax money on overly religious curriculum. So, the publishers take out the blatant references to their beliefs, but they don’t add in any secular information because they don’t want to lose their religious homeschool customers. This mostly affects science curriculum which then lacks both scientific theories and mythological explanations. However, without a mechanism that explains how things came to be how they are today, aren’t we just back to thinking it magically poofed into existence? Creation without an explicit creator?

Click here for more details on the problems with neutral science curriculum.

If you want to make sure the materials you buy for your homeschool are secular, join the Facebook group Secular, Eclectic, Academic Homeschoolers. The group rules allow only secular resources to be discussed, so you can avoid all of the suggestions of how to skip the religious parts.

Truly secular materials are out there. Please support those publishers.